So anyone who knows me, knows I’m a control freak. I also overanalyze everything. These two traits make it really hard to plan a vacation. I spend weeks agonizing and debating where we should go, days analyzing the flights and debating whether to book and which flights to book, more weeks debating which hotel we should stay at. By the time it’s time to start planning the nitty gritty — where to eat, what to do, etc. — I’m exhausted and want to call the whole thing off. Sometimes I wish Andrew would just plan the whole thing and tell me to pack a bathing suit and sneakers and I could just go. But a trip that someone else entirely planned would totally freak me out. So I was surprised that I agreed to go on one with my family. Honestly, I’ve been so exhausted recently that I’ve just needed a fun getaway but I simply haven’t had the mental capacity to plan one.

But there are actually companies that will plan a trip for you, like Pack Up and Go. You fill out a questionnaire, input your travel parameters (how far you’ll go) and indicate your preferences and who you’re traveling with and they’ll put together an entire trip tailored to you, complete with restaurant recs and reservations, itineraries, and directions. The catch? They won’t tell you where you’re going until the week of (and even then, they send you an envelope with all the info and you’re not supposed to open it until the day of the trip). Normally this would sound like my worst nightmare, but I’ve been in the mood for an adventure and as Andrew reminded me, my last big surprise was finding out the sex of our baby when James was born, so I was actually excited for a fun surprise. So I agreed to go on a road trip with my husband, baby and dog with no clue where I was going or what I would do until I arrived… and I’m so glad I did because we had the best time.

Don’t tell, but I have to confess: When we got the envelope, we couldn’t hold out until the morning of the trip to open it. We tried but we have no self control and my inner control freak needed to know where we were going. (Side note: I’m actually glad we ended up opening it ahead of time because it allowed us to sync up with a friend who lives nearby but I do think there’s probably a lot of fun in opening the day of and getting that extra sense of adventure.) I’m not gonna lie, when we opened the envelope – which read, drum roll please, ANNAPOLIS – we were a bit disappointed. Neither of us knew a lot about it (Andrew had driven through but I had never been) and it wasn’t the beach town we had envisioned. However, we figured it was an adventure, fun way to mix it up, and visit somewhere we probably would never go otherwise. Good friends of ours live in D.C. so we invited them to come down to meet us so it also became the perfect excuse to see some old friends that we don’t get to see nearly enough.

The way down was rough. We left around lunchtime Friday and the 3.5 hour drive ending up taking 5 hours. We hit traffic every which way, which in retrospect we could have better planned for, but you live, you learn. There were some cool suggested stops along the way, including a fun farm with tons of family activities that we should have stopped at, but we brought Dakota and while doing some online reading about the farm came across the fine print that said no dogs. I wish we had stopped anyway even if one of us had to stay outside with the dog because after a long nap, James was up and completely over being strapped down in the car, so the last three hours of the ride were basically spent trying to entertain him and keep him from crying and screaming, mostly unsuccessfully. But we made it and were pleasantly surprised by the adorable town we arrived in. 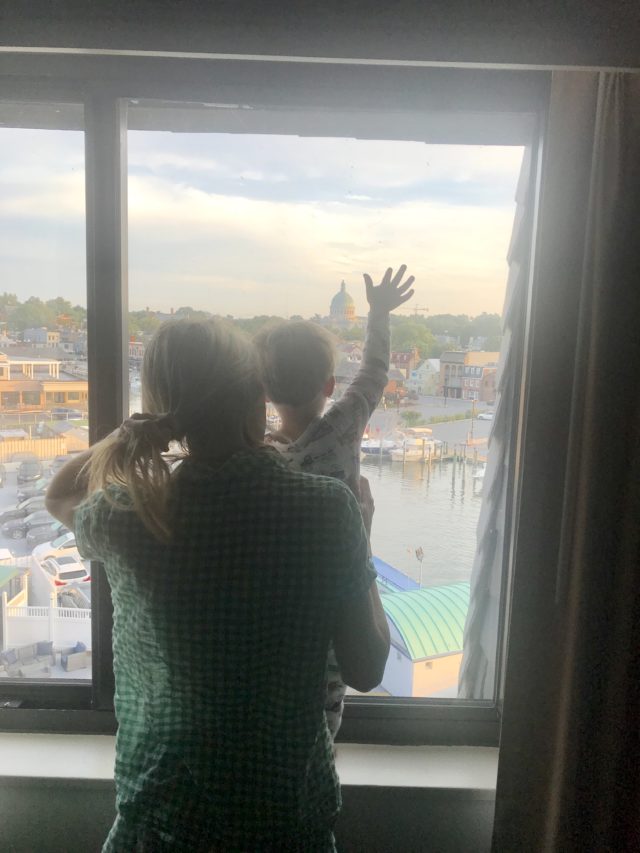 We checked into the Annapolis Waterfront Hotel, which is adorable and boasts views of the harbor. Our room was big with a huge comfy bed and great view. It was also across from the fitness center and I got 30 minutes at the gym Sunday morning, my first time setting foot in a gym in two years, which was amazing. The hotel has an awesome waterfront restaurant and bar with live music so you can drink and eat while listening to music and watching all the boats in the harbor. We did this Saturday afternoon after walking around all day and it was the perfect spot to catch up with friends and enjoy the beautiful day and waterfront scenery. James even slept in his stroller despite the fact that we were right next to the music so we were really able to relax and enjoy.

When we arrived we had a reservation at The Iron Rooster, which is a popular spot in town know for their all-day breakfast. Everything is homemade and we ended up coming back for breakfast on both Saturday and Sunday. It was that good and the service was great and family-friendly. They also have outdoor seating so we could sit with Dakota at breakfast and overlook the town and its cobblestone streets and harbor. 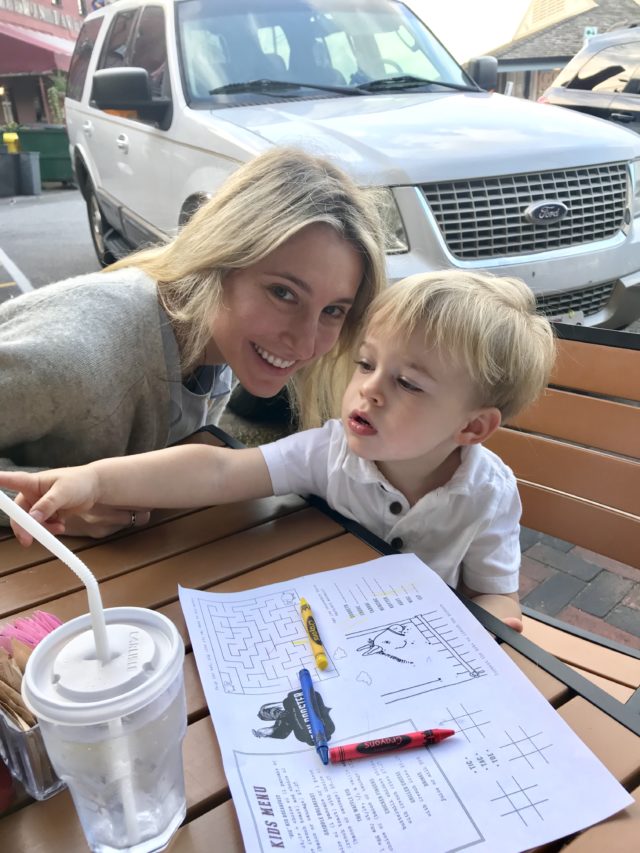 After spending the morning walking around town, checking out the historic homes and cute shops, we drove about 10 minutes outside the city center to an adorable hidden gem on the water called Cantler’s Riverside Inn. It’s nothing fancy but totally packed with locals who know how good their crabs are. You can see the crabs they catch downstairs while you’re waiting for your table and then they roll out paper on your table so you can crack them right in front of you, which was really fun for James to watch. All of their food is great though. I recommend the crab dip, soft shell crabs, and corn on the cob. If James hadn’t been cranky, we could have hung out there all day. We had a great seat right on the water and it was fun watching people paddle board, jet ski and boat.

Afterward, we treated ourselves to ice cream at Annapolis Ice Cream Company. Now, all ice cream is good imo, but this was exceptional. It’s all homemade and the perfect texture. They have delicious flavor combos to like Vanilla Peanut Butter Chocolate (my fave) and Strawberry Nutella. 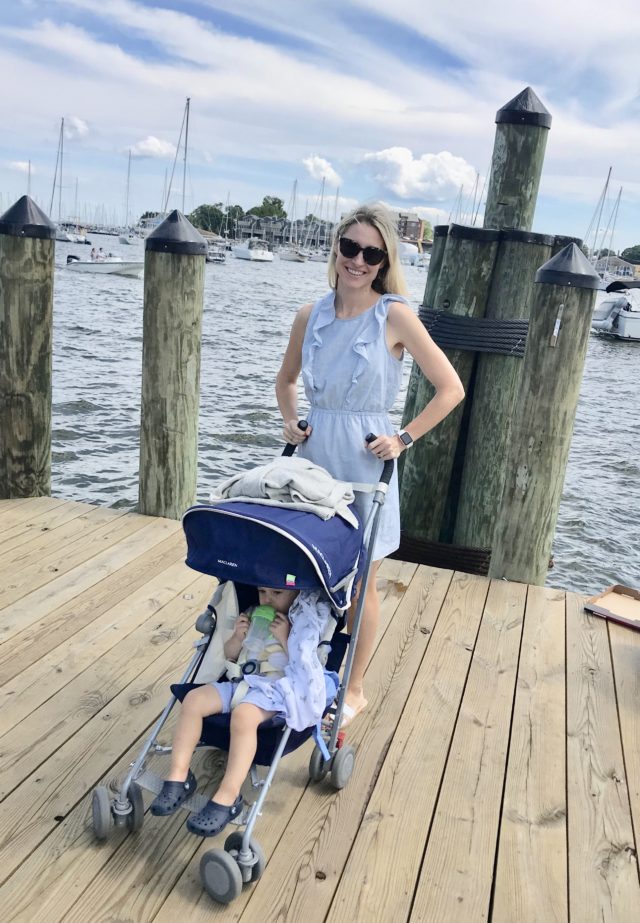 While walking off our ice cream cones, we made a stop at The Black Dog shop to get James a souvenir. They gave him a balloon and the smile alone was worth the $30 sweatshirt. He didn’t let go of that balloon even when he finally fell asleep. 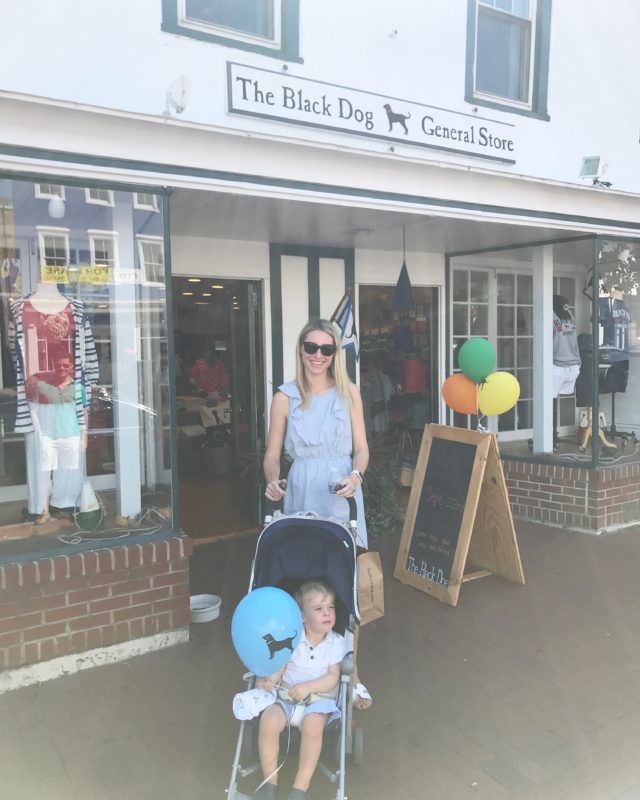 We found a cute little sushi spot for dinner that our friend recommended. It wasn’t bumping like other restaurants but the sushi was unreal — perks of having an insider with us. James started to get a little sick at dinner so we had to head back to our hotel to put him down after dinner. 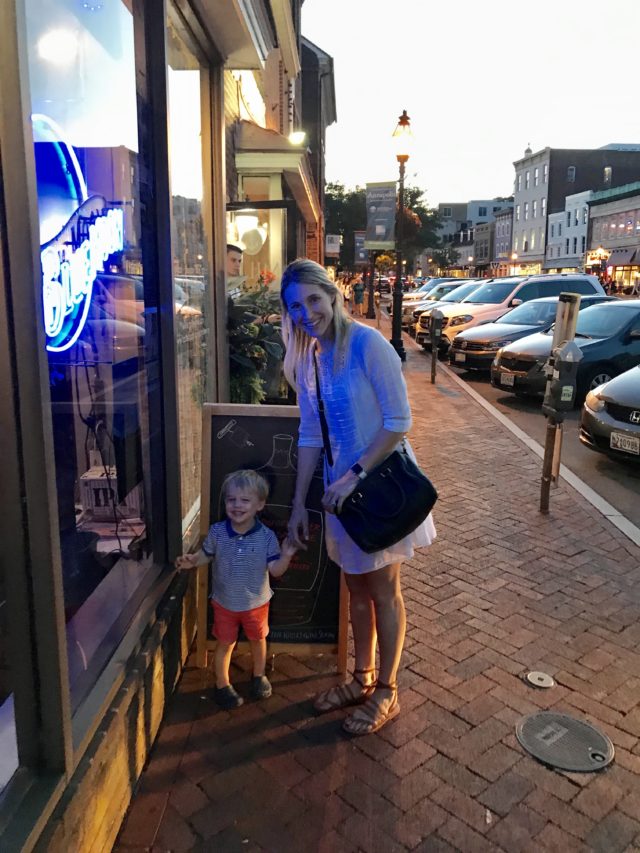 We left early Sunday to beat traffic (it really was a quick trip) but not without stopping at The Iron Rooster for one last homemade breakfast. The drive home was much easier — barely 3.5 hours back to New York and James was amazing for all of it, probably because he was sick, but still. 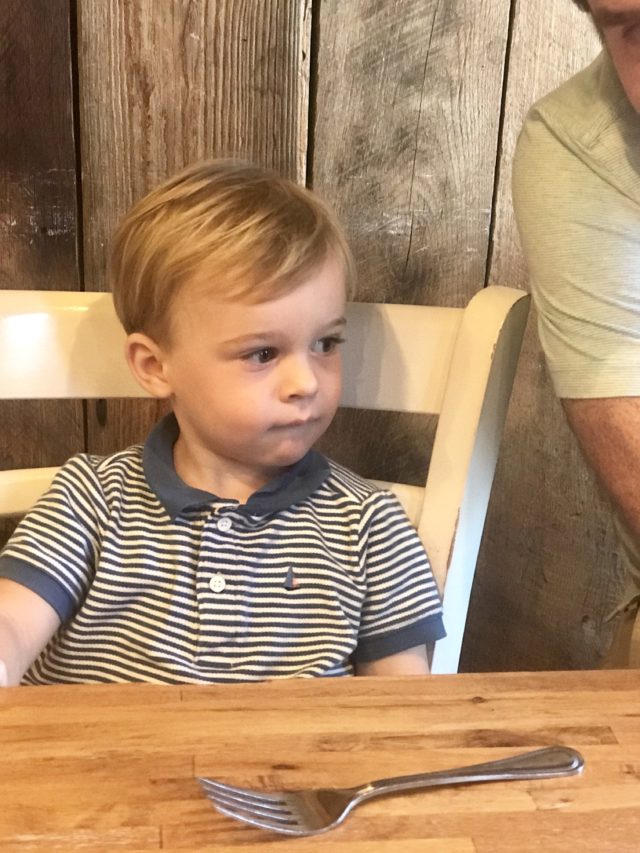 We got to borrow the Ford Eco Sport for the trip, which was a fun change of pace from our wagon. It’s super compact for east city parking, so much so I was worried it wouldn’t fit us and all our gear but it totally did — with room to spare. It has built in WiFi which is a huge plus as Andrew is always getting mad at me for using up all our high speed WiFi each month and it allowed me to work from the road. I definitely recommend it for city living.

Infertility Diaries: The Family I Don’t Have

What I’ve Learned From 5 Years of Marriage

What I Learned From Going on Vacation with...

What to Wear to Play Tennis