All The Baby Gear You Need to Survive the Winter

One of the reasons we’ve been contemplating moving to California (besides all the reasons that California is amazing) is the weather. I’ve always thought of myself as someone who loves four seasons but honestly, with a baby and a dog, it’s really hard. All the bundling up required just to get out of the door for a cup of coffee or diaper run is insane and then there’s navigating the streets of NYC when they’re all icy and covered with gross dirty snow. It’s not the winter wonderland of my childhood. Still, the first snow is always magical as are the occasional snow days when the city shuts down while being buried under a blanket of snow, and you know I still have such a love-hate relationship with city living. So while we continue to contemplate if we’re really ready for the suburbs or a cross country move, I’ve found this winter baby gear really helped me get through my first winter with James and is helping me get through his fast-approaching second winter.  Here’s all the winter baby gear you need.

In NYC, the stroller is basically your car, so I found this 7 A.M. Enfant stroller blanket/sleeping bag essential In winter. It keeps your baby cozy and warm even on the coldest days. It used to put James right to sleep – I think something about the combo of cold, fresh air with its bundled warmth. It works for a bassinet when they’re little little and then adjusts in size so now that James is more toddler size (tear), it still fits, making it a worthwhile investment. 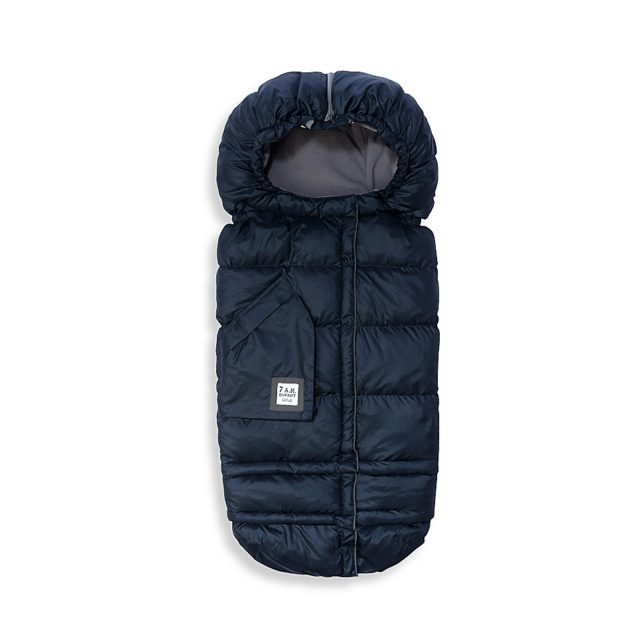 Whoever invented these stroller mittens is a genius. My mom got me these for Christmas last year, and they’re the best. They keep your hands super warm, you don’t have to worry about bringing gloves and taking them off and putting back on everywhere you go, and because Mom Brain is real, you don’t have to worry about where you put your gloves every time you go out. Also they’re so much warmer than any gloves I’ve ever worn, including my ski mittens tbh. 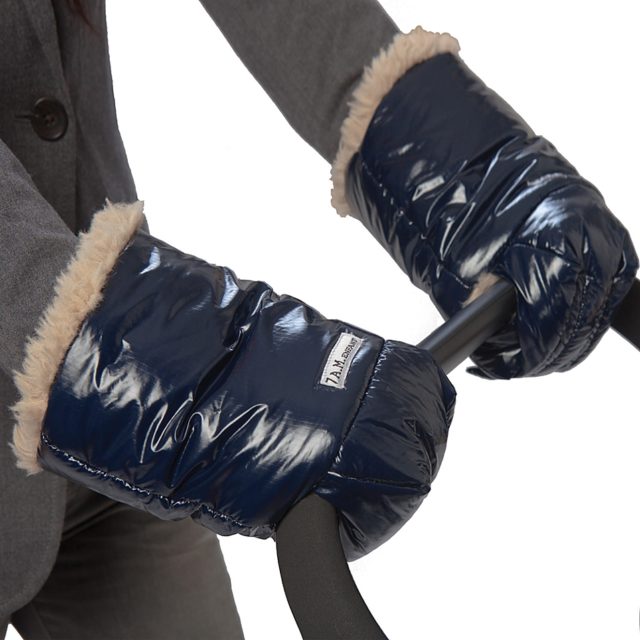 I preferred to wear James when he was little – walking around with him was my main exercise when he was born and it really was the only way we could get him to nap for awhile (he wasn’t a fan of the bassinet). I never got one of these jacket extenders – honestly didn’t know they existed until I saw some woman with one and chased her down to find out what it was. Instead I would wear one of Andy’s coats that could zip up over James and then wear my coat open on top. That worked fine except when Andy needed his coat. This would have been a lot easier and better for restaurants and moving around more easily, and it apparently works great for keeping your bump warm if you don’t feel like buying a maternity jacket for winter. If you’re planning to wear your baby when you’re out and about this winter, this is definitely a smart option if your husband doesn’t have a coat that can do the job. 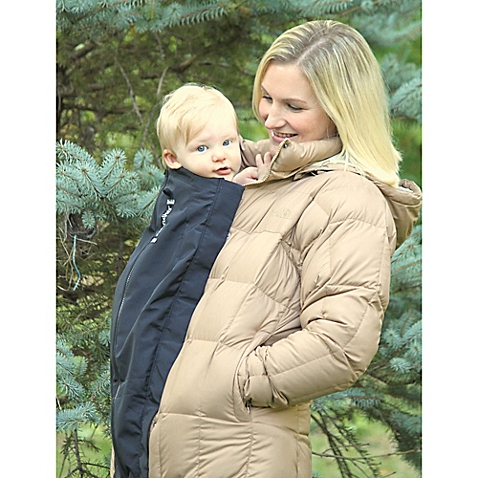 James has never been very good about shoes. It’s been really hard to get his feet into them, even now that he’s walking. If he’s just going in the stroller or carrier or hanging out around the house, these shearling booties are great. They keep his feet warm, are super cute, they’re easy to put on (and stay on) and I don’t have to worry about putting on socks if I can’t get him to hold still. Plus, how cute are they? 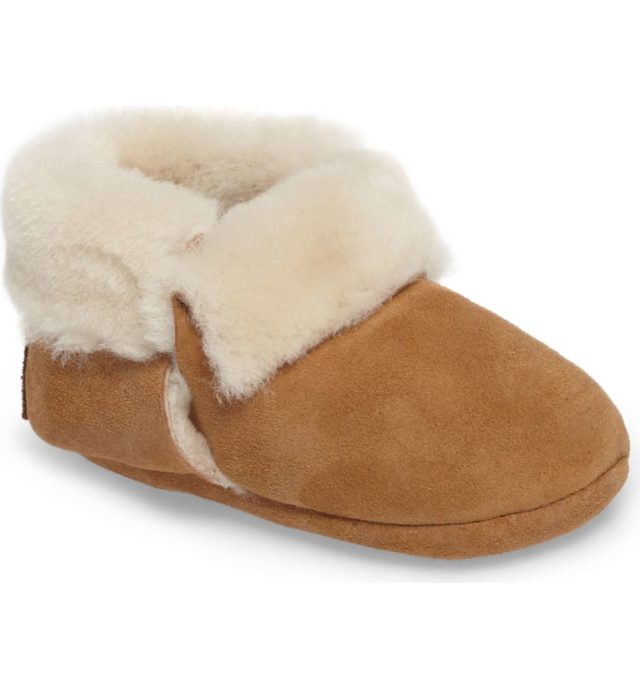 There are so many cute hats for kiddos it’s hard to choose. (I just got James this one and how cute is this one?). But as you probably have deduced I love me a monogram and these monogrammed hats couldn’t be cuter. They’re not cheap but make great gifts and if you are down to splurge, you could wait until your little one is a bit bigger and I think you can make it last two seasons. At least that’s what I’m hoping to do for James. I figure their heads don’t grow that much… right? 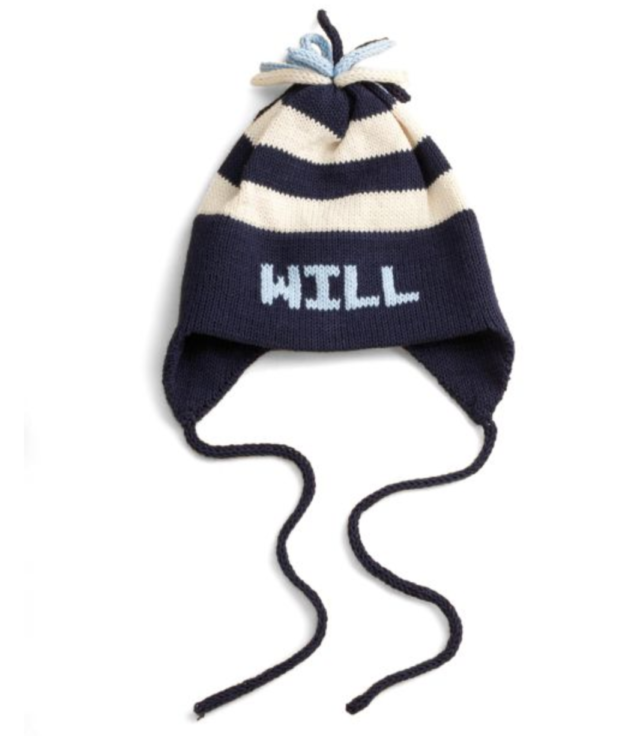 I can’t with the cuteness of these mittens. James actually likes them too and keeps them on for an average of two minutes before tossing them, which I see as a win. I think it’s because they’re lined with jersey material so they’re super soft and not itchy. Now if anyone knows a trick for getting gloves to stay on baby hands or a pair that don’t come off without making your little one throw a tantrum, please let me know. 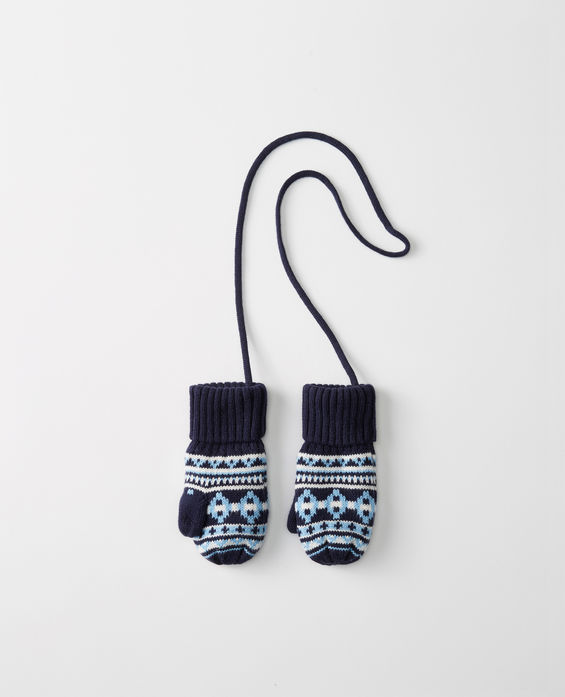 Since we’re heading to park city for Christmas, James really needed another snowsuit. Last year, we rotated between a few softer ones (a furry one that was a hand-me-down, another furry hand-me-down and this fleece one and this fleece one). They worked really well for the baby baby stage because they were easy to pick him up in and wear him in and soft for him. Plus at the time, he was too little to play in the snow. I love this fleece-y option for younger babes, and this one is a classic. This year, however, I am excited to see him run in the snow and make snow angels and snowman and even hit the ski slopes maybe. So we need something that’s a little heavier and waterproof. Tbh I’ve been hesitant in investing in one because he’s been growing so fast, I am worried halfway through the season he’ll outgrow whatever fits him now. And I even the Gap Baby snowsuits are almost $100. So when I saw an adorable Hannah Anderson option on sale (which is sadly no longer available), I scooped it up. It looks so cute on him. I don’t know how their gear works in snow snow, so I may end up sucking it up and getting him this Patagonia snowsuit for Christmas to wear if we take him skiing (which I know sounds absurd but I’m committed to starting him young). Of course, if I was going to splurge, I’d probably go with this Canada Goose option based on the fact that my parka from the outerwear brand is the bomb. 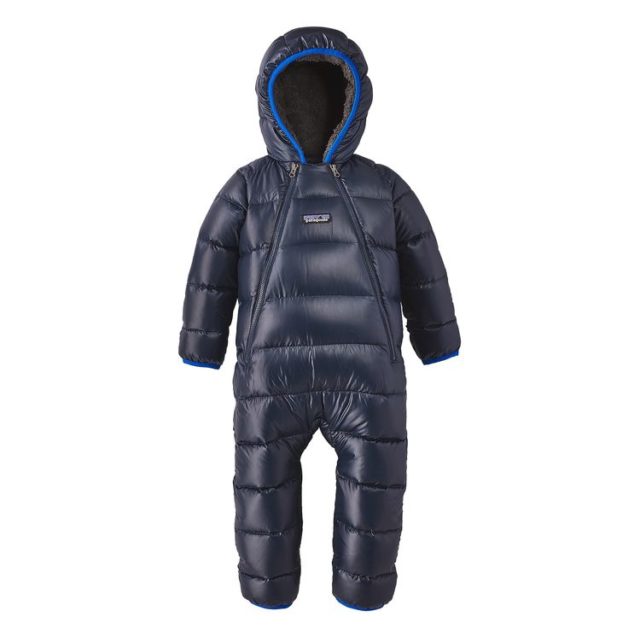 This Patagonia jacket has been the perfect fall to winter jacket. It’s warm and cozy and couldn’t be cuter. It’s pricey but I really love Patagonia’s products. They lady forever, are great in weather, and we went with a neural option so hopefully can be handed down to our next kiddo. I also really love their puffer jacket, which is great for winter temps and snow. Other fall jackets I love are this toggle one from Gap and Mini Boden’s teddy bear jacket and both are on sale! 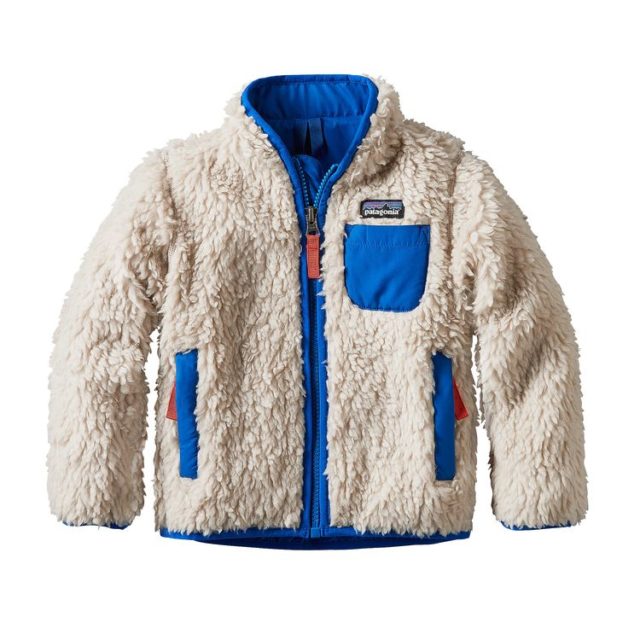 James got several vests for his birthday and while adorable, they’re not super practical, so I exchanged one of the vests for a winter coat from Jacadi (similar here). We really lucked out because they were having a sale, so I ended up paying practically nothing for this really nice jacket. I went with 24 months, which I was nervous would be too big for this season, but their stuff runs small and it turns out, it fits now with the sleeves rolled, so I’m glad I went up that far. The coat is super cute and warm and will be perfect for holiday parties but is also good for everyday. Andy says it makes James look French, but French babies are the cutest, so I’ll take it. If you’re looking for something a little less pricey, I also love this one from Mini Boden has a really cute puffer jacket that would work well. If we hadn’t found the Parka, I probably would have gone with this puffer from Patagonia. 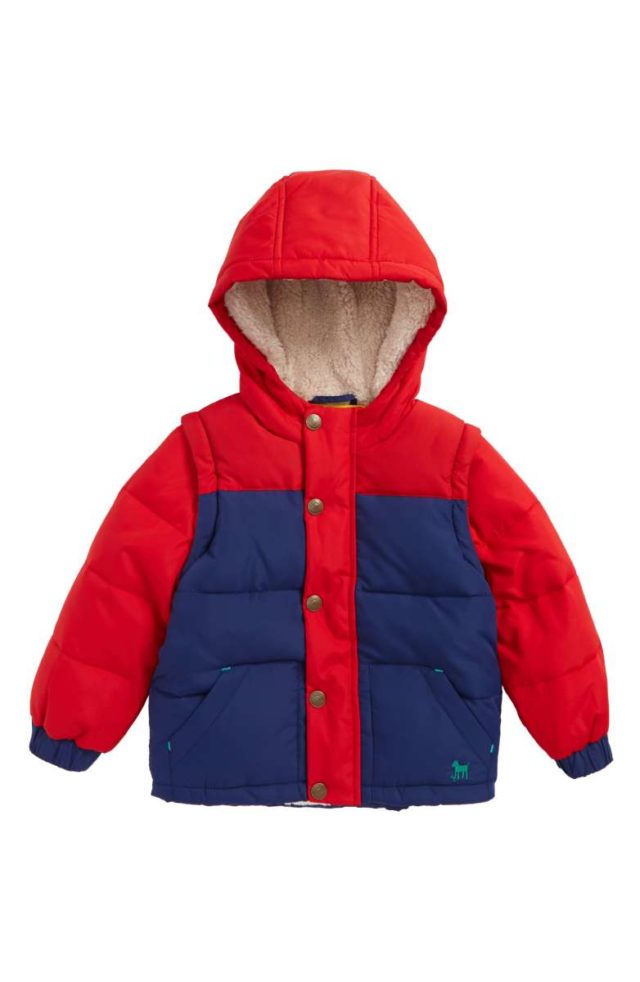 People love Robeez booties and for good reason, they’re great for winter for babies that aren’t wearing shoes yet. They’re much easier to get on than shoes and you can wear them outside. We were lucky enough to get a pair of hand-me-downs from James’ cousins. They also are easy to get on and stay on. Patagonia also makes a fleece bootie that are great. 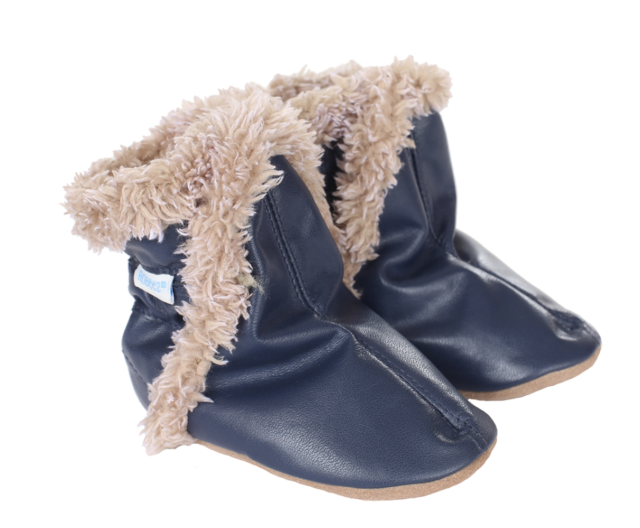 There’s nothing cuter than an adorable baby sweater IMO. There are so many cute options, but because our apartment gets super hot in winter, I try to only invest in a few really cute ones for holiday parties etc. and then I try to just snap cute sweaters when they’re on super sale and estimate what size he’ll be when it’ll be time to wear. For example, Baby Boden had some cute sweaters on super sale last summer, including an adorable whale cardigan. They have so many cute ones right now, that I’m trying to narrow it down to one or two, like this festive option and this perfect-for-fall one. 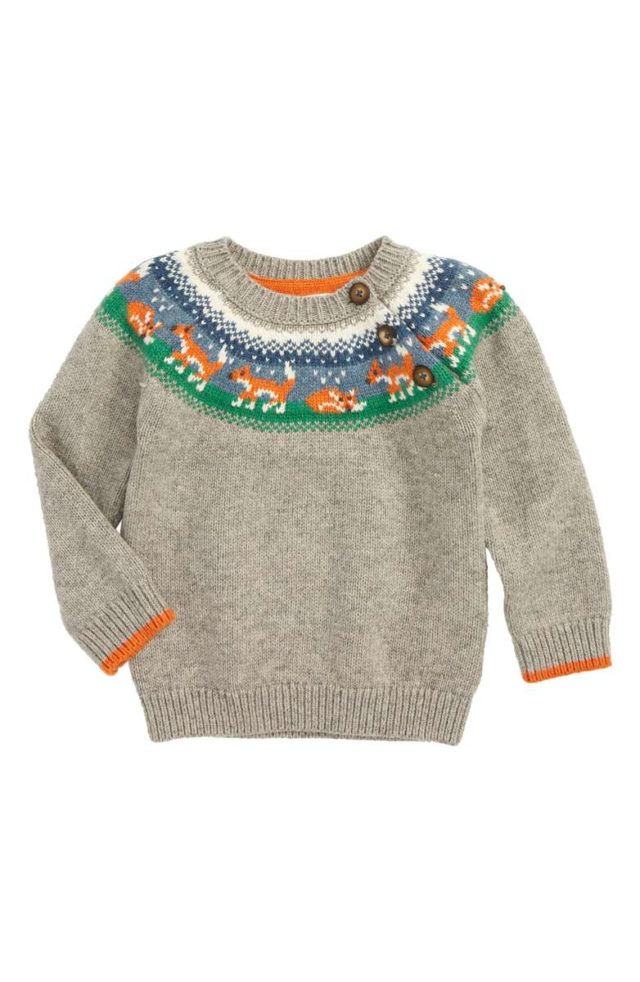 James has really sensitive skin and his cheeks get really chapped in the cold. A little Baby Aquaphor is a lifesaver. I put it on his cheeks as a barrier before we go in the cold. I also like to put a little under his nose when it gets red and runny.

We used a swaddle and then the Magic Merlin sleepsuit (I also like this one), which was super warm and took us through last winter. Since he outgrew the Merlin man suit we’ve been using muslin Aidan + Anais sleepsacks, which have been great. But now that it’s a little colder, we’ve switched to a heavier, lined version to keep our little guy toasty at night. It’s actually helped him sleep better too. I think he likes being more bundled up at night. Even though he’s technically past the SIDS risk age, I’m still paranoid about having blankets in the crib with him and he moves around so much, they wouldn’t stay on him very long anyway so the sleep sack works much better for us. We just use a long sleeve onesie underneath most of the time but on really cold nights we’ll bundle him up in a footed pajama onesie. 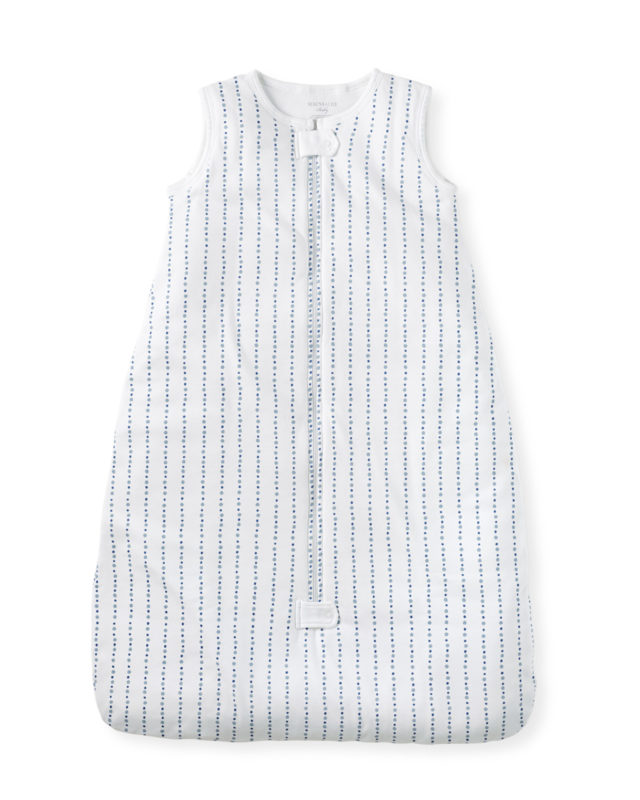 These pants are genius. They’re lined for extra warmth and are soft and stretchy enough for running and crawling so they’re as soft as leggings. I’ve gotten pairs from both Gap and Mini boden and they’ve both been great.

An Unexpected Take on Fall Plaids From My Favorite New Brand

All My Favorite Brands are on Major Sale at Shopbop

J.Crew is Getting Good Again

The Best Fall Sweaters to Cozy Up In