Before I had James, I loved rainy days. It was the perfect excuse to stay in my pajamas, binge watch Netflix and order takeout. But all that changed since becoming a mom. Every mom dreads a rainy day. Keeping kids entertained while cooped up inside all day is no easy feat and it’s hard to get a toddler’s energy out if they can’t run around outside. Little kids need the fresh air and without it, they become hyper little maniacs. Luckily, our nanny has found some amazing activities to keep our little maniac busy when it’s pouring and because it’s rained almost every weekend, I’ve discovered quite a few on my own. Here are my favorite rainy day activities for toddlers. 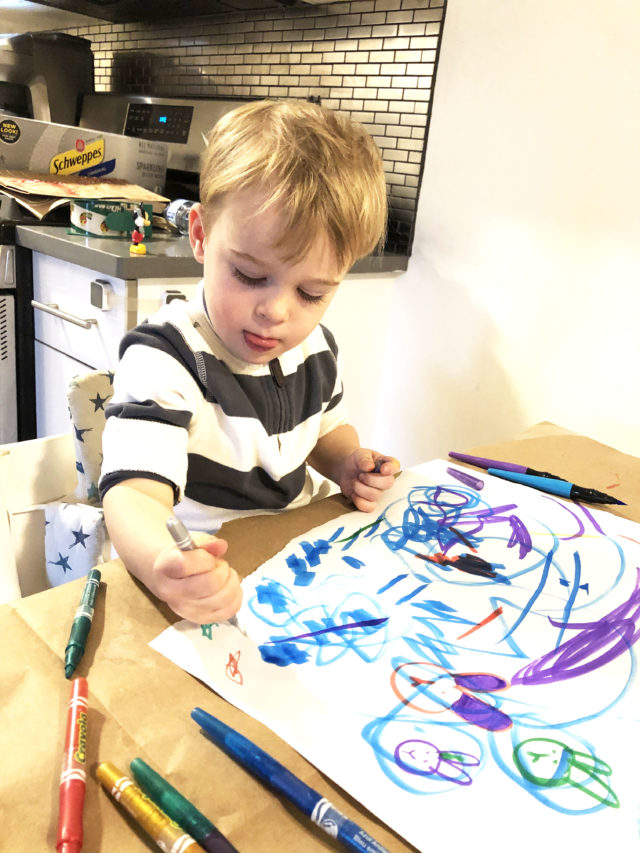 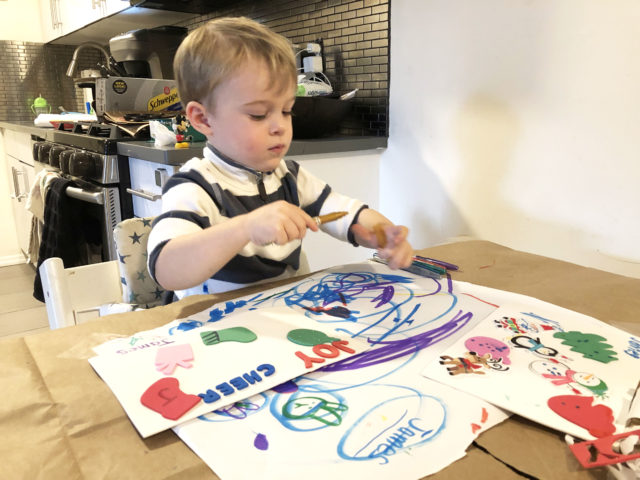 Michaels hosts craft activities for kids that we’ll hit up when the weather is bad and we’re bored, but we also do lots at home. James is a little young for cutting, but we’ll decorate with stickers, I’ll cut and he can help tape or glue and decorate. There are so many fun things to make but some of our faves are:

James just discovered the magic that is playdoh and he’s been having so much fun playing with it. Right now, I have just let him play with it using old kitchen utensils and a mat, but for Christmas he’ll be getting more fun playdoh toys because he’s been loving it so much.

James loves coloring but using paint or real markers feels like a special treat since we don’t normally let him play with either on his own. We’ll lay out newspaper all over, and let him paint on white contact paper or old Trader Joe’s bags. We have used crayola paints in the past but I’m also loving their paint markers, which tend to be a little less messy. When I don’t want to deal with a mess at all (or we’re on a plane or train), we’ll use these water coloring books, which are genius.

Of course coloring is a favorite activity and easy way to keep him busy for a bit. We found some coloring books with characters he loves like Elmo and Moana to make it more fun. Sometimes he’ll play with normal crayons and other times, he’ll use these magic crayola markers. They don’t make a mess and they’re fun for him to draw with.

We live in New York City, which is home to some of the world’s best museums so rainy days that used to be spent at the movies (James is still too young to sit through one) are now spent at museums, which actually makes me feel better afterward – like I got smarter by osmosis or something. And it’s nice to feel like your doing something “cultural” for your kid. We love to go to children’s museums since they’re made for kids and so there’s a lot to stimulate him but they tend to get super crowded when the weather is bad so sometimes we’ll just go to an “adult” one that will somewhat interest him and allow him to run around like the Natural History Museum. When he was a baby, it was easier to stick him in the carrier or stroller and go to the Met or Moma,but unfortunately, he doesn’t stay in his stroller for very long and is at the age where he wants to touch everything so we try to avoid those for now.

Shopping is an easy way to kill time and malls tend to offer something for everyone. We live in the city but if we’re in the burbs on a rainy day, we’ll go to a nearby mall. Many like The Westchester have play areas for kids, there’s food, Santa in winter, and lots of stores and bright lights and new things to keep them busy and they can run around. It’s a pain to chase after them, but if you know that’s what you’re going to be doing and aren’t super set on doing some serious shopping, it can be a great way to let out some energy.

This isn’t one we’ve tried yet, but it’s something I want to do when he’s a bit older and understands pretend play. I don’t ant to do the whole shebang – build a puppet house out of cardboard and paint it, maybe make sock puppets, and put on a show.

James loves to play in the kitchen and help make stuff, so baking is my go-to when we need an indoor activity that will keep him busy for awhile. We have made everything from

Cookies and cupcakes (which are fun because he can decorate them) to healthy banana muffins to pizza (which I realize probably doesn’t count as baking but he had so much fun making it) to French toast and pancakes. Really anytime he can get his hands dirty and mix and stir and pour, he’s happy and then when it’s ready, you have a meal or snack already ready.

Cranking up some fun music and dancing is a fun way to get energy out for everyone and I consider it a workout so win-win. Our dog, Dakota loves to run around when we’re getting silly so it’s actually like exercise for the whole family.

Honestly, James feels a little young for this one but a lot of fellow moms recommended it. Right now, I try hiding a few fun things around the house and he’ll stay in the game for maybe one of the items (although usually I have to show him where it is after a few minutes), but he’s still a little young to fully get the concept and has too short of an attention span to really stay on the hunt for long. However, I did enlist him in hiding treats from our Dakota (our mini goldendoodle for those of you who are new to the blog) and he loved doing that and then watching her find the treats (and helping her to find them).

I loved building forts on rainy days when I was little and a lot of mom friends who live in houses do this with their kids (or let their kids do this) to help beat boredom. I think this would be more fun for James if a) we had more space and b) he had a friend to build and play in it with. But I did one time build a landing out of pillows and cushions and let him jump from the couch onto it and he loved loved loved that. It made me a little nervous that he’d miss the pillows or try it when the pillows weren’t there, but so far, so good.

The library is always a good refuge in bad weather. You can read books, let them run around a little, and hopefully, catch story time. We live in the city, so we also love to hit up our local bookstore, which has a whole area for kids as well as Barnes and Nobles, which also has a fun kids section. Even if we don’t do a ton of reading, I feel like it’s somewhat educational to be surrounded by books, right? And sometimes a change of scenery does wonders.

I love doing indoor picnics. They feel special and it’s just cute. But honestly, it’s also a mess, especially with our poorly behaved dog and our messy toddler. He won’t sit still for it that long unless we do the picnic while watching a movie or show. Maybe he’ll enjoy it more when he’s older or maybe I’ll have a daughter one day and we can do a tea party. Something tells me James is just never going to want to sit still long enough for the picnic or tea party.

This isn’t something I’ve actually tried at home, but it’s another mom suggested activity. James really doesn’t sit still so he’s not a good candidate, but it’s something easy to do with Halloween makeup or even old makeup you have lying around. Bonus points if you’re the chill mom who lets the kids paint her face too. (I doubt I will be but then again, I’ve gone out in public looking a lot worse.)

My Favorite Places to Shop for Baby Girl...

Everything I Bought to Keep James Entertained (and...

How To Get Your Toddler to Stay In...

Why I’m Not Super Excited for the Holidays...

The Baby Toys That Were Actually Worth The...

Merry Christmas From My Family to Yours

How to Work From Home With Kids