Home At Home Our Hamptons Vacation Diary
At HomeFamilyTravel

Sorry I’ve been a bit MIA but we just got back from a week in the Hamptons and I really took advantage of the chance to savor time with our little family and catch up with friends. I’m not gonna go as far to say relax – I’m not sure that’s something you get to do when you have kids, even on vacation. Or at least not with an active toddler who needs to constantly be watched and ran after. But we still had the best time and I relished being able to focus on running after him. I had high hopes of creating lots of blog content while away, but honestly, we didn’t get much of an opportunity. Running after James and Dakota and trying to keep them busy and fed exhausted me, and I wanted to take some time to just relax when James was sleeping and then an unexpected hiccup (more on that in my next post) made me feel like checking out for a few days rather than taking pics. So while I wanted to give you lots of pics to go with my recs from our vacation, sadly, I don’t have as many as I’d like, but I guess that’s a sign of an amazing vacation, right?

We stayed in to Quogue, a special little spot in the Hamptons where Andrew and I first started dating and used to spend our summers pre-kids. It’s really so beautiful with the best beaches, good friends, and just an all around special spot for us. Andrew likes to jokingly refer to it as “the land of milk and honey” and while I don’t even know what he’s talking about, it’s pretty amazing. Andrew grew up coming out to Quogue with his family, so he has many lifelong friends out there that have become my friends as well and the area is full of fun summer memories.  The town  itself is tiny without too much going on, but Westhampton is a short drive and has tons more stores, restaurants, etc. We spent a lot of time walking around Westhampton, grabbing lunch (Margarita Grille is one of my faves, mostly because you can sit outside and it’s loud and casual so James can be screaming and no one cares; other faves include Baby Moon for pizza, The Patio, Post Stop Cafe for lunch, The Apron Cafe and Eckart’s for brunch, and John Scott’s for cocktails), looking for new shoes for James (he outgrew almost all his shoes while we there) and some beach toys, and getting way too many ice cream cones (we hit up just about every ice cream spot in town and there are more than a few!). 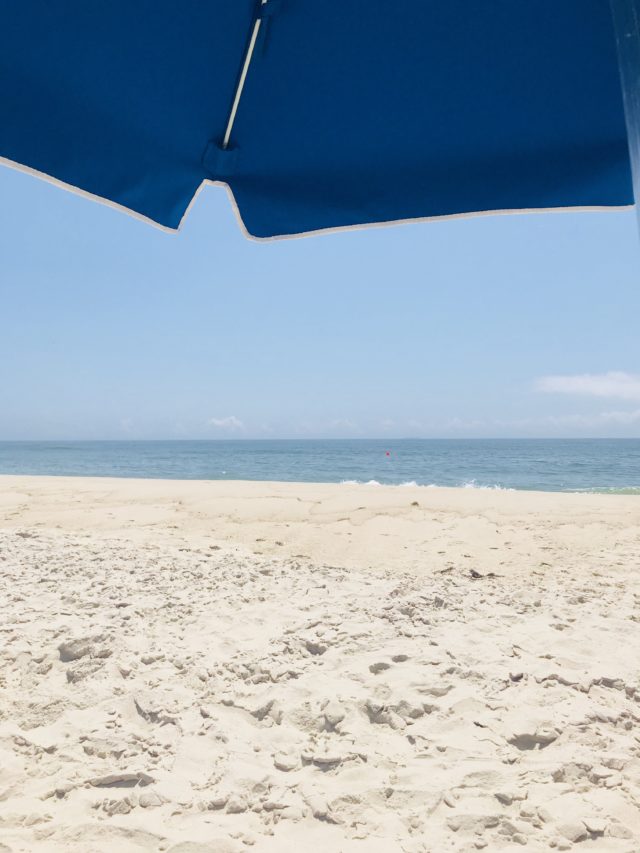 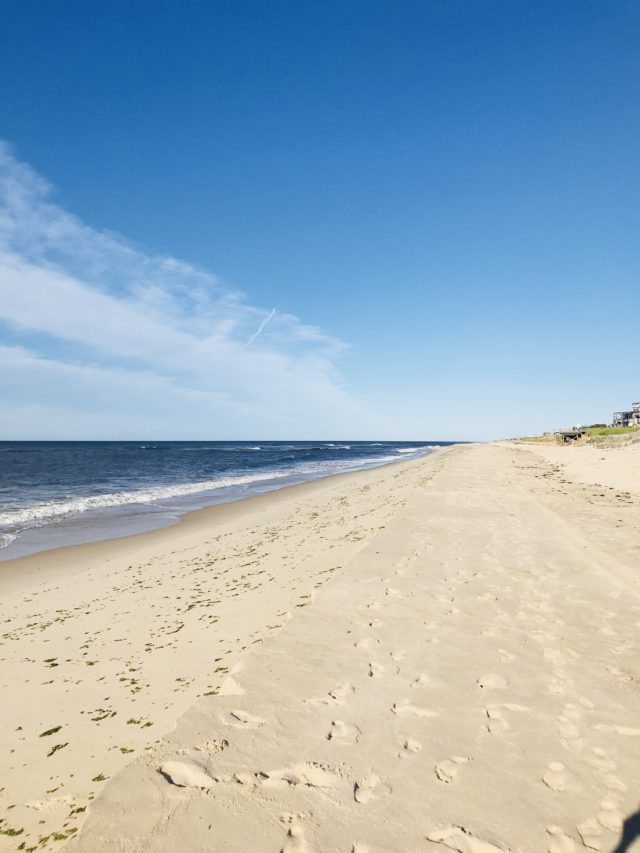 We rented a small beach house with a big backyard and screened in porch, which we spent lots of time on. James and Dakota loved running around the backyard. It made meals easy – we barbecued a lot and ate in the screened in porch, which is in many ways much better than going out to eat when you have a toddler who can’t sit still and a dog you left inside all day while you were at the beach. It also allowed us to have friends over a few nights and be social without worrying about finding a sitter or trying to make James behave at a restaurant. 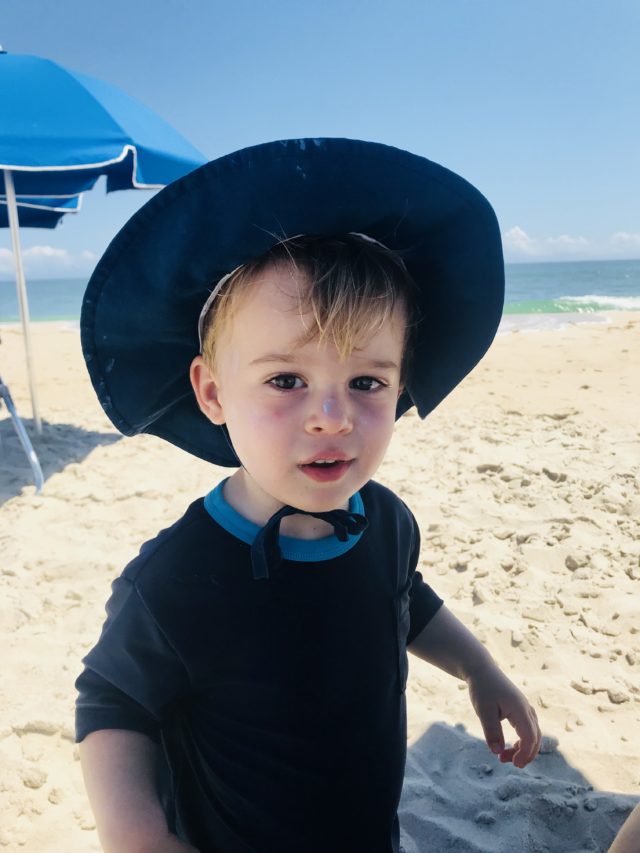 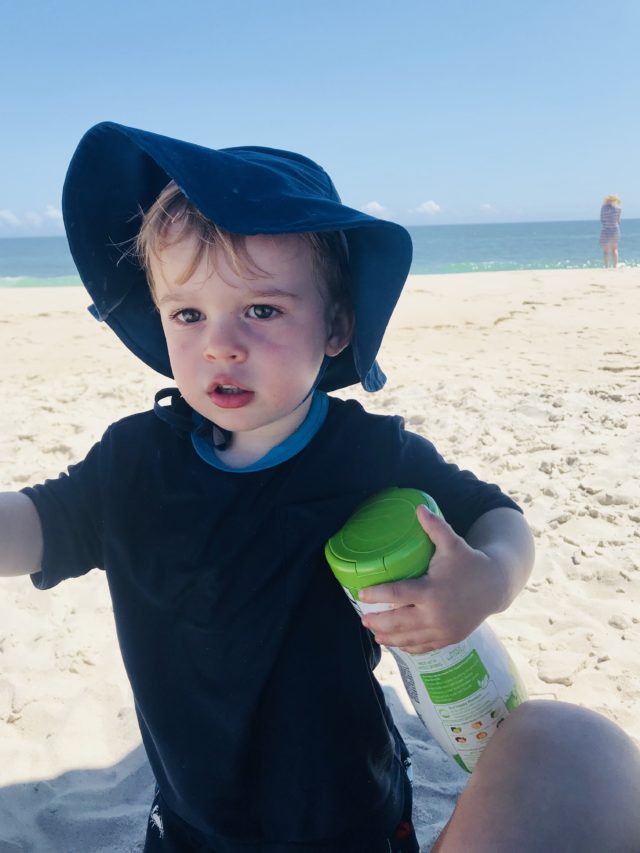 During the day, we mostly hung out at the beach and James loved it, which is awesome because we love the beach and the Hamptons beaches are really beautiful. Since we were up early, we took Dakota to the beach in the morning and let her run (dogs are allowed before 9am) and James loved running after her and she got tons of exercise so we didn’t feel bad about leaving her at home during the afternoons. 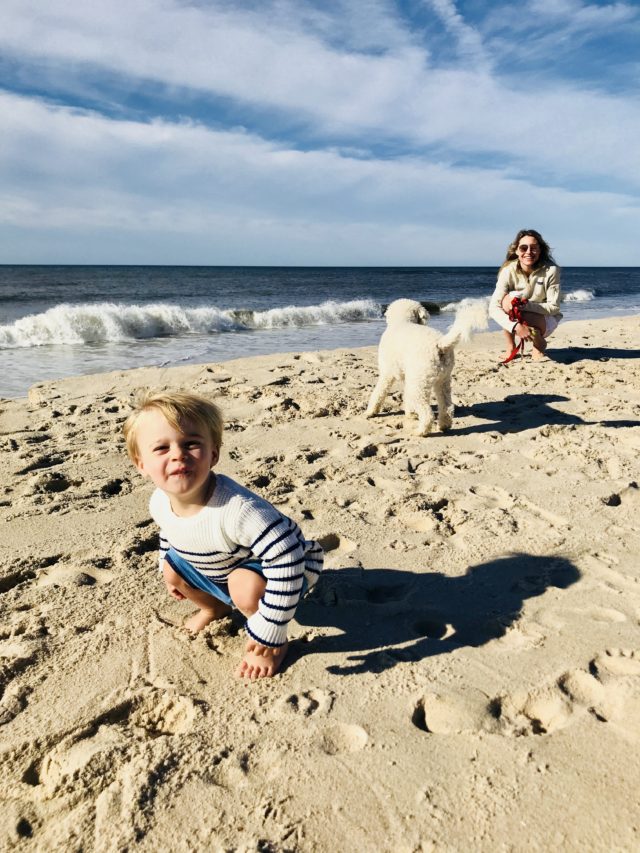 On the Fourth of July, we drove to South Hampton for the parade. We got there with an hour to burn and after eating at the Golden Pear (amazing food – I highly recommend it), we were at the end of our rope and not sure we could last another 20 minutes before the parade. James couldn’t sit still and it was so hot and humid, we were both getting sick of chasing him around and we had Dakota in tow. We actually started walking back to the car after James got something in his eye and started to freak out but we found a good spot along the parade route in the shade and decided to stick it out and I’m glad we did. It was fun to watch and felt really Fourth of July-y. We spent the rest of the day at the beach and pool and had friends over for a bbq that night , so all in all a perfect fourth. Sadly, James was wiped from the busy day and fell asleep early so we missed out on fireworks but it felt like a small price to pay for such a great day. 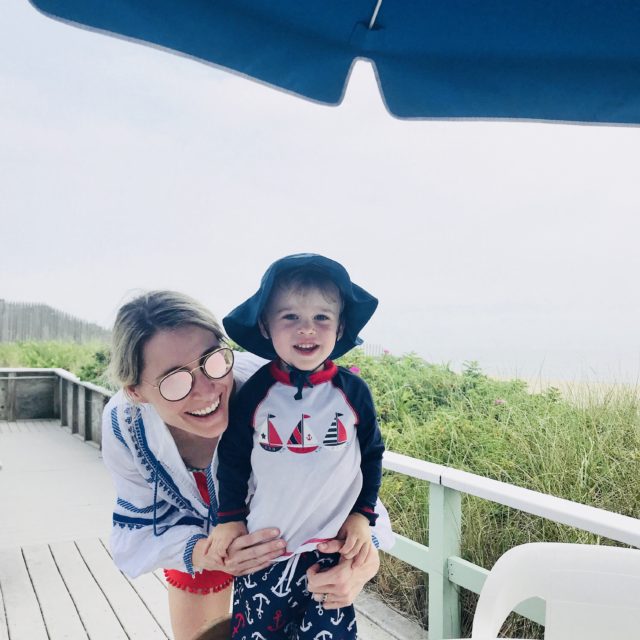 We spent most of the rest of the week at the beach and pool. James really loved hanging out in the pool and I was glad I brought his floaties. He enjoyed the kiddie pool but also loved going in the big pool with his dad and I. We brought his beach toys and I’m so glad we did. He actually played in the sand and occupied himself nicely. We didn’t have to run after him too much or deal with constant meltdowns, which was amazing and the equivalent of relaxing with a book these days. 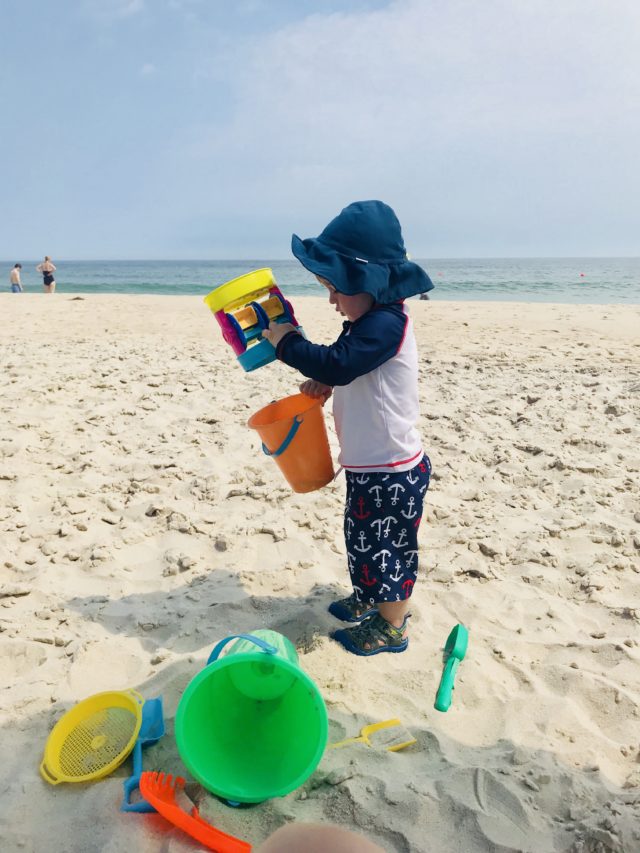 We also went on a boat ride with friends one afternoon. We used to do lots of cocktail cruises with friends before kids, so it was fun doing it again and getting to peruse all the waterfront real estate, one of my fave activities. It was
James’ first time on a boat like that and he loved it and was pretty well behaved. 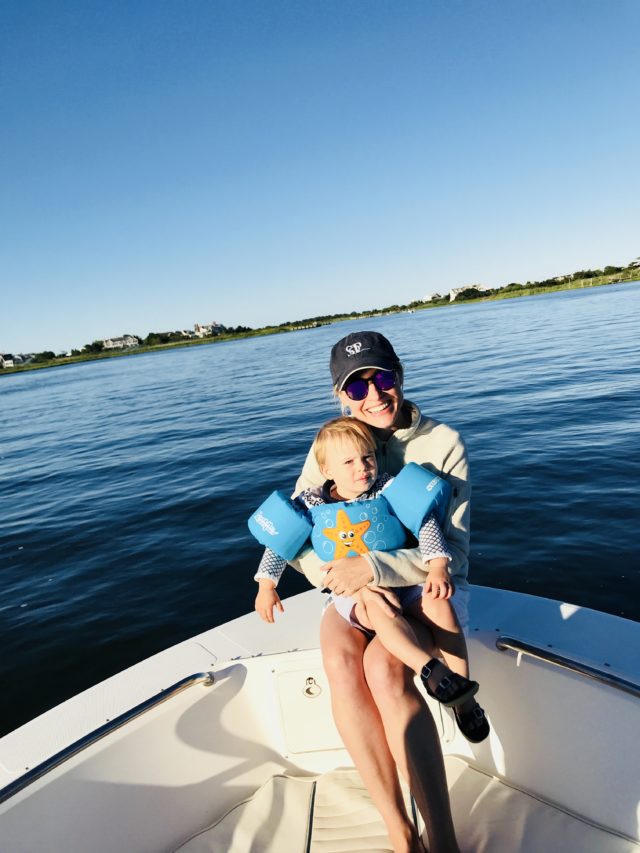 Overall, we really lucked out on weather. It was rainy/drizzly one day and even that day wasn’t bad. I managed to get a run in with James in the morning. We went to brunch in South Hampton and then drove to the Tanger Outlets in Riverhead, which are kind of dumpy but have a Pottery Barn, Restoration Hardware and Williams Sonoma outlets, which I love. We didn’t make it to the aquarium in Riverhead, which was the original plan, because James fell asleep but that is a great rainy day activity. The rain stopped when we got back so we took James to the Quogue Wildlife Refuge, which was a perfect way to blow off energy. We didn’t have his stroller otherwise we would have hiked one of the trails, but he had lots of fun running around it, and seeing the different animals and it’s just so scenic. 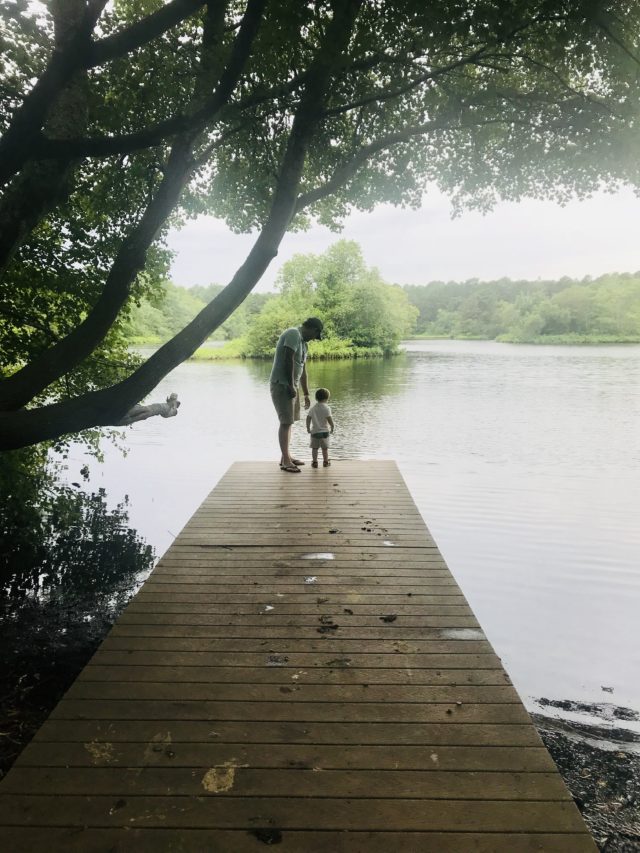 To cap it off, on our last day, we discovered this awesome new restaurant in East Quogue called Hamptons Farm. It’s adorable with farm to table food and everything was delicious and the atmosphere is so cute.

It was bittersweet leaving. It finally really felt like summer and honestly, it was really nice escaping reality for a bit and both my jobs and getting to be 100 percent with my little guy and our family.  I felt like we really had gotten away and while I was dreading coming back, after eating too much and spending tons of time outdoors and in the sun, I genuinely feel like I got a vaca.

How to Work From Home With Kids

How to Decorate With Mirrors

Tips for Surviving Winter With a Baby/Toddler

35 Genius Ways to Organize Your Shoes