My Favorite Spring Activities to Do With a Toddler

I love watching James grow and develop and it’s easier in some ways not to have to carry him everywhere, but I miss the days of being able to go outside and have him be content just chilling in his stroller or carrier. Running after him all day is exhausting. With spring fever at a high, I’m also eager to get out of the house more so we’re trying to think of fun things we can do with James to take advantage of spring and not go stir crazy. It’s hard when you’re sleep deprived to motivate to do anything on weekends, but I find he’s more likely to nap and the days are more fun and easier when we’re out and about. Plus as they say, the days are long but the years are short and as a working mom, weekends tend to feel like they go by to quickly so I want to find ways to make the most of my weekends so that going back to work on Mondays is easier. So this spring, I’ve been trying to work ahead to make a bucket list of fun activities we want to do with James. Here’s what’s on our list – let me know anything fun we should add that’s on ours. 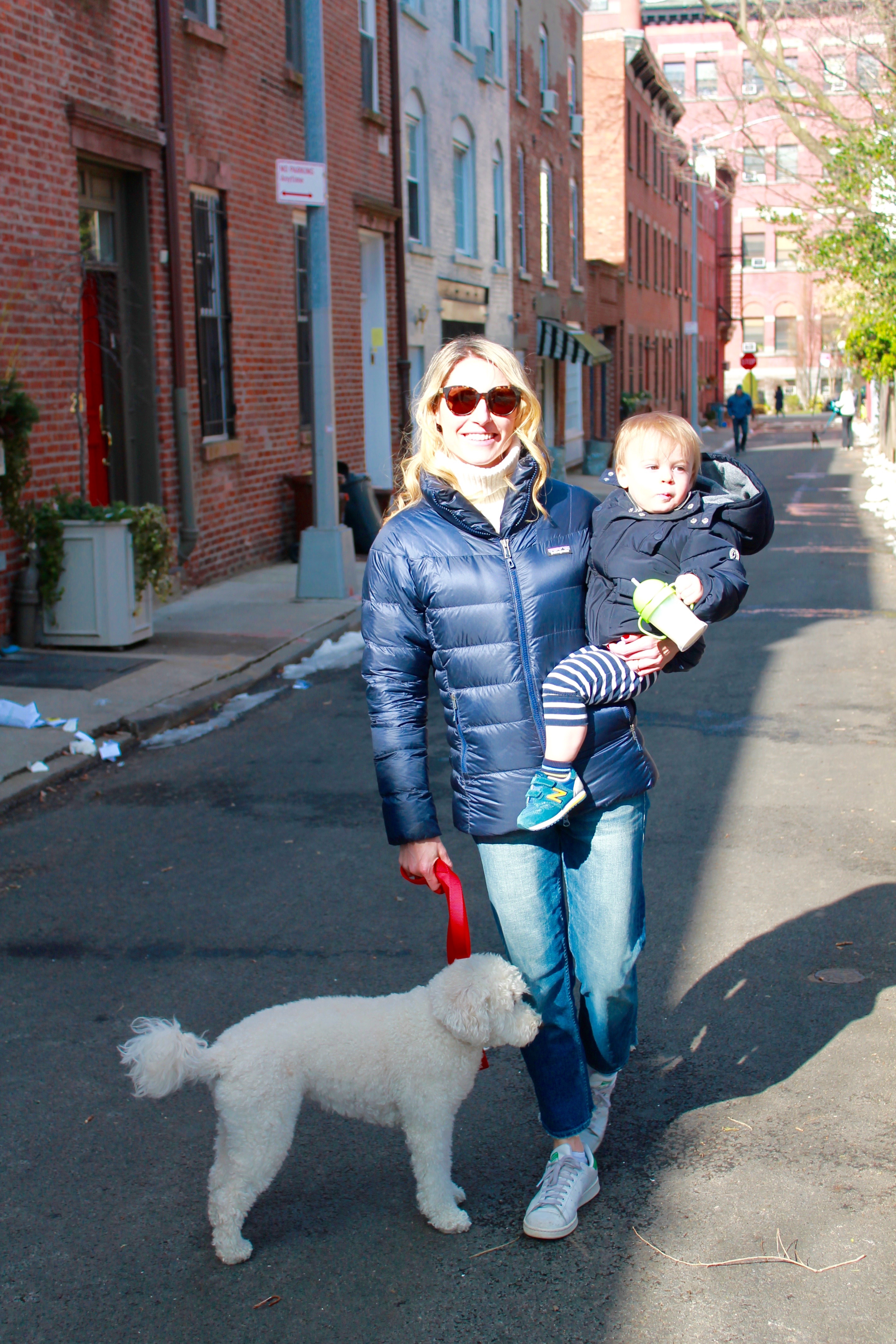 This is obvious but honestly, we don’t do this enough. We’re not at the stage where we can sit and sip coffee while he runs around which is part of the reason, but I want to take more advantage of our local parks for play dates and getting early morning energy out. I know we’ll be happy when we do and it’s a great way to catch up with other parent friends without having to sorry about if your house is clean enough to have anyone over or if your kid will throw a fit in the middle of a restaurant. In addition to our local parks, I want to take James to the Highline to explore and other outdoor oases in the city that we haven’t really spent much time at since he’s been born.

Full disclosure: we have never been to the Bronx zoo, which is supposed to be amazing and one of the premiere nyc activities for kids or really anyone. This year, I want to make a trip with James. I also want to take him to the Centeal Park zoo, which is small but fun and near many of our friends with kids. We went to the Staten Island zoo last year with James on a whim after realizing I had never been to Staten Island and it was fun even though he was still pretty little and in the carrier. The stimulation was fun for all of us and I think it’ll be even better now that he’s big enough to appreciate the animals.

While traditionally a winter activity, we didn’t venture to some of nyc’s most iconic museums this year because of the snow and cold and mostly did trips to the children’s museums when we needed to get out. Now that it’s warmer, I don’t mind making the treks around the city to spend an hour walking around and trying to get James (and ourselves) “cultured”.

We’re still debating city versus suburbs, but we’re going to continue house hunting to help us understand which neighborhoods we like best and so if something pops up that feels eights we can jump on it. This is also a chance  to check out the local parks and restaurants and shops.

Now that the snow is thawing, I want to spend more time outdoors when we go outside. I can’t wait to start hiking again. There’s a great fly fishing river nearby that we love to hike down to in summer and it’ll be fun to do the hike in spring. Last year, I just carried James in the baby bjorn, but this year, I’m thinking we may need some sort of hiker backpack. Has anyone used one? Do we need for an 18 month old?

We did some bike riding on our trip to Florida in February and I’m excited to do more with James. It was great excerise, a fun way to get places and riding In the carriage put James right to sleep. We’re debating whether to invest in a carriage that you pull behind the bike or a seat that goes on the back of the bike which frankly scares me. I think we’re going to keep the bikes upstate since I don’t anticipate doing much biking in the city, so maybe a trailer is the way to go?

Another confession: I haven’t been to  he famed New York botanical gardens at all and I think it would be fun to do with James. We missed the winter train show over the holidays, but hopefully, they have some kid friendly programming for spring. Even if they don’t, it’s a place for him to run around and explore.

So we have two strollers we keep in the city currently, one in the burbs (a hand me down), one upstate (another hand me down). We live in an apartment, so we really don’t have space for a jogging stroller but I haven’t really exercised at all since James and think it’s time to get back in shape. I’ve been trying Tracy Anderson workout vids in the mornings but it’s hard with James and I want to get out and run. I thought he could munch on snacks while I run. My hesitation is space and then if we have another, I would need a double jogging stroller but that wouldn’t be for awhile and wouldn’t a jogging stroller be an investment in me? We have the big Bob stroller from Andrew’s sister but they live in Connecticut so it’s the big one so we keep it upstate and I love running with it. I’m thinking maybe we try a smaller one for the city. Does anyone have any recs?

Now that the kids can hang outside on our deck, I’m excited to have some of James’ friends from the building over to do more arts and crafts. We tried painting indoors and I’m still getting it off our kitchen table, so I’ve banned indoor painting but I think he’ll love creating stuff and getting dirty with washable paints. And if he paints our deck, hopefully, the rain will eventually wash it away. Chalk is also a fun activity for a deck or driveway. 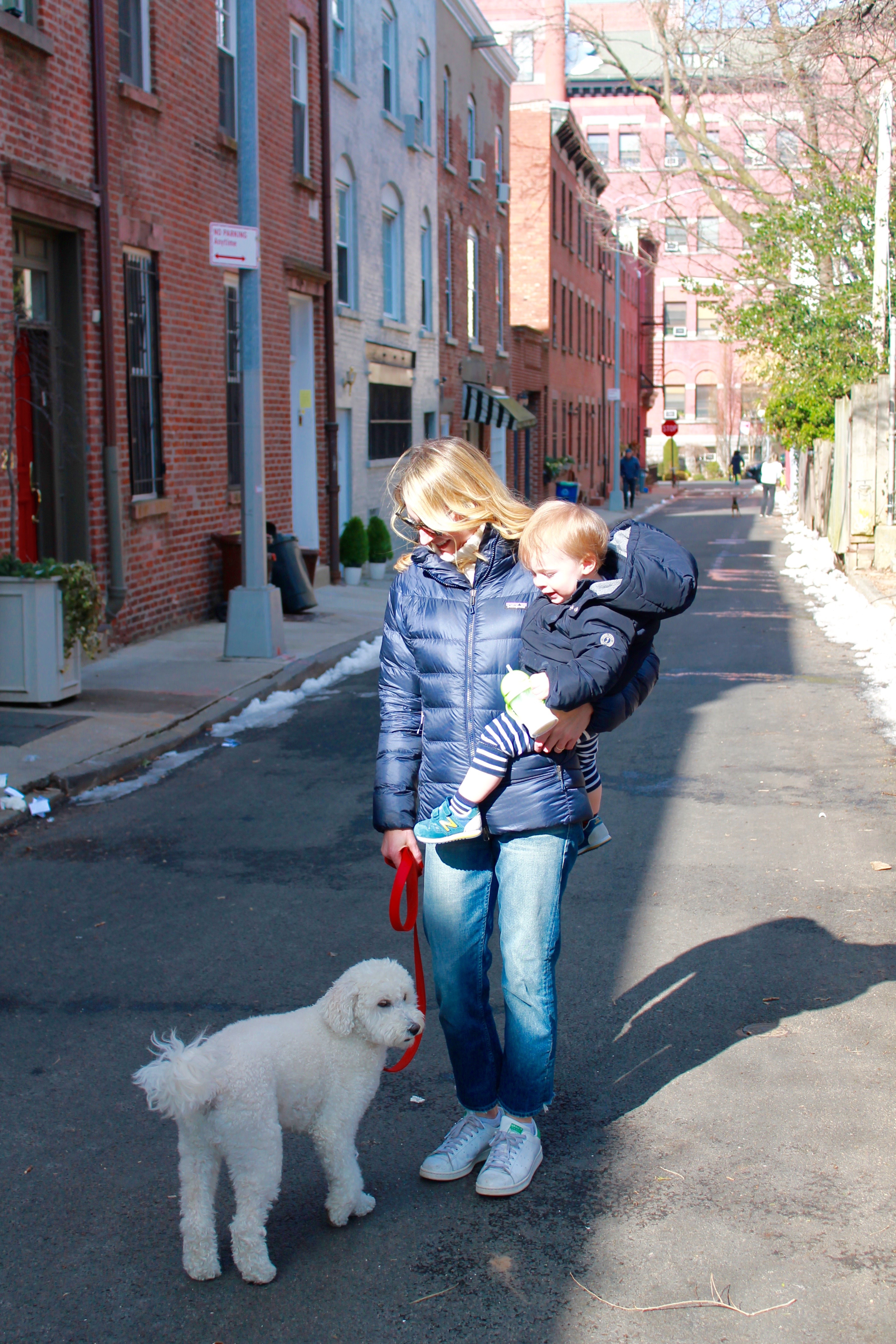 Okay clearly this is nothing genius, but sometimes just taking Dakota for a walk is enough to tucker James (and us!) out. James loves to hold the leash now and chase after her, and it’s a fun (albeit slow) way to explore our neighborhood and enjoy living in the city. With a coffee in hand, it’s an easy way to get Dakota walked, get James’ morning energy out, and get outside.

Do You Have Hobbies?

To Vacation With James or Not

How to Get Up and Down Stairs With...

Escape From the City

I am a marketing coordinator at the New York Botanical Garden. Your post came through our google alerts.

Just wanted to let you know that we have a Children’s Adventure Garden (link here: https://www.nybg.org/garden/childrens-adventure-garden/) as well as programming for children year round. Our gardens and indoor Conservatory are also reasonably child friendly.

I live in Carroll Gardens and love that street you are on by the way!

That’s so exciting! I cannot wait to check it out with James and so cool to have a friendly neighbor nearby! Such a beautiful area. Thank you!